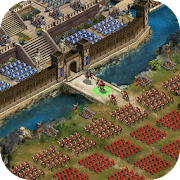 Kings owned their thrones, they got the glory in the war. Get all of this in AOE-I! The death of the former king left an empty throne. Battle kingdoms, real-time war, fight enemies with your allies, build your castle and plunder resources with strategy in the epic war. This is a game of kings entangled. Who will be victorious in this war, and to be the next king?

Worried about a language problem? Real-time translation will solve your troubles; Worried about the lack of resources for an upgrade? Abundant activities are waiting for you;
Worried about the strength is not strong enough? The alliance system will assist you to get your glory then ascend the throne.

In AOE-I, you will be a king to resist the invasion of other players, protect own kingdoms and resources and cooperate to the enemies with your allies. During playing the game, you can collect resources, build buildings, train armies, recruit heroes and take part in an alliance until you become the overlord of one region and finally become the great king. However, it is just a simple start, more new and interesting elements are waiting for you to participate.

More activities will be added to the game center. Please follow Facebook to view more activities info in time.
Get everything you want for free in a mobile strategy game of AOE-I! Come and try it now!
Invite your friends around you to join this gorgeous war!
You should believe that you will be the next king!

Ace of EmpiresⅠ Features:
√Online Multiplayer PVP war battles. Train armies, recruit heroes and lead them into an epic battle of a kingdom.
√Rebirth of Empire
The empire to be abandoned, you are free to choose how to develop. Lead your people and create new glory!
√Train soldiers
ACE-I is a worldwide mobile strategy game. Not only conquer with other but also put your strategic mind to test against your enemies from across the globe in AOE-I. You will play an unexpected role!

√Recruit Heroes
A great hero of each period will now be used for you!
√Conquer of Alliances
Different Alliance, or cooperation, or even betrayal. Hold the throne of a kingdom with your allies!

You are not the only kind of building the empire! In this real-time MMO mobile strategy game, you are always beyond the world's lords. King will not easily give up the throne.
Powerful your armies, conquered the other kingdom, get the throne, become the real king of AOE-I for the last glory!
We look forward to your arrival!

Download AOE-I and join players from around the world!