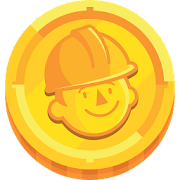 City Clicker: Build a City, Idle & Tycoon Clicker is an incremental game where you can develop and build a city by establishing different districts. Hire managers (mayors) who will automate the process of earning through city districts.

Do you love idle clickers, economy games, and money's tycoons? You have just found a perfect one. Start with almost nothing. Become a smart money maker and cash clicker. Expand your city empire and make wise investments to become a millionaire, a billionaire and beyond! Generate high profits, build your own business empire and get rich.
City Clicker: Build a City, Idle & Tycoon Clicker will also allow you to visit cities established by your friends!
At first, you will have to click manually to earn funds to buy more districts. After collecting the first funds, you will be able to hire district mayors who will automate the process of generating income through specific districts. Your task will be to collect as much money as possible. Automate your city and collect profits.

Airport will allow you to visit the cities of your friends. You can track your friend’s city through their nickname or the name of the city. Once a day, you can assign a gift to another player. This gift comes as a balloon.

Dollars that will be generated by your districts
Bank notes you will earn for achievements and special actions.
Gems, which will give you an additional multiplier for all income.

Mayors will be district managers. For a district to generate profits, it must automatically have an assigned mayor.

The tapping game never ends and your goal will be to collect as much cash and as many inhabitants as possible. Spend to make more money!
Incremental Idle Features:
Simple gameplay
Many types of districts
Many types of mayor cards
Multiplayer - visit your friend's cities!
Prestige system - refresh your gameplay!
Minigames - casino mode
Achievements
Nice, cartoon graphics