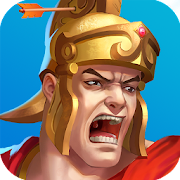 Clash of Empire is a strategy RPG mobile game that includes SIM and battle play. Players can run their own empire in the game, allocate land and resources reasonably, and attack the opponent's city at the right time to get more. Multi-props and supplies to strengthen yourself! It also allows players to form alliances with players to cross the East and West!

● Building development, witnessing the rise of Roman Empire
Building regional buildings to benefit you and your allies; building markets, barracks, and the Senate to promote the development of the kingdom. Summon reinforcements, command your troops, and block the enemy's army!

● Enriched play and feel the charm of imperial war!
A variety of gameplay and growth settings form a spectacular game world. The player base construction, the legion system, and the different types of combat systems are composed of arms: rich arms training, equipment output system and upgrade, and accessories transformation and advanced, and the recruits will be upgraded and upgraded.