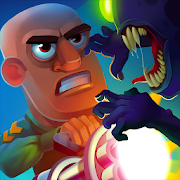 Don Zombie - Kill the Undead! is a new Zombie survival action shooter, You are Don and you kill the walking dead.

Don Zombie - Kill the Undead Feature :
- Fight for your survival in a zombie apocalypse with this classic action shooter.
- Choose from an arsenal of combat weapons.
- Make upgrades, earn money and battle against the hoards of zombies in terrifying environments.
- Watch out, horrifying boss creatures are stalking through the darkness!

Load your guns and unleash vengeance upon the army of brain eaters.