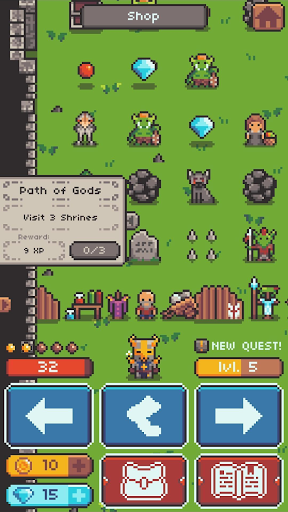 Eternis Heroes is turn based fantasy RPG with roguelike elements.
▣ FREE ROGUELIKE RPG
Explore a free, turn-based RPG with a different world procedurally generated every time you play. Select from eight mighty heroes with unique abilities and explore a grid based world with tons of loot, monsters, and interesting encounters. You can unlock new heroes, items, and skins with the in-game currency, Diamonds. Start your adventure in the realm of Eternis, choose your difficulty, pick your hero and fight your way through three different acts. Develop your own strategy and chart your own path in order to defeat Astaroth, the Lord of Hell, and be immortalized in the Hall of Fame!

▣ EPIC STORYLINE
In the fantasy realm of Eternis, Astaroth, the Lord of Hell, has succeeded in his quest to possess the spirits of the animals, corrupt the hearts of man, and reign over them as their new King. However, the four gods Tierac, Balkus, Ladris, and Vethir joined forces to bless 8 champions with their divine guidance and protection. Only these eight Heroes: the loyal Knight, the brilliant Mage, the deft Ranger, the wise King, the furious Barbarian, the devious Warlock, the clever Rogue, and the devout Templar, stand a chance of defeating the Lord of Hell and purging the land of his foul evils. Do you have what it takes to be the Eternis Hero?

▣ TONS OF FEATURES TO EXPLORE
- Eight playable characters with a unique focus and powerful abilities
- One hundread items with a variety rarities and effects
- Over 30 enemies and bosses
- Three world locations: the Fairy Forest, the Shifting Sands, and Howling Hell
- Over 50 tiles that you can interact with
- Unlockable items, characters and cosmetics
- More than 20 quests to help you on your journey
- Hardcore gameplay where your Heroes will die frequently
- Online High Score
- Procedurally generated world with endless replayability

▣ TURN BASED PROCEDURAL GENERATED WORLD
The realm of Eternis is a grid based world with procedurally generated tiles. This feature guarantees highly replayability and endless fun. On each play through you can decide which path do you take, the risky one or the safe one? With high risk comes high reward. Every step counts!

▣ OLD-SCHOOL PIXELART GRAPHICS
Eternis Heroes was built with the old-school spirit of pixel art graphics and chiptune music. The gameplay, graphics, and music are strongly inspired by retro video games and culture.

▣ THREE DIFFICULTIES
Eternis Heroes has three difficulties. To unlock the next difficulty you need to defeat Astaroth in the previous difficulty. With increasing difficulty, the amount of reward and score also increases.
- Normal:
Enemies are easy to kill, but beware, the bosses can still be challenging.
- Hard:
All enemies are tough and dangerous; but with a good plan, and a little luck, you’ll find your way through.
- Extreme:
Even the weakest foe is hard to kill, you could die at every step. You will need to find the best strategy and also tons of luck to find success. But, you will rise above the ranks in the Hall of Fame!