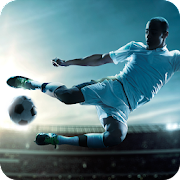 Flip Football New It’s a free 2k18 mobile game in which you’ll get the most astonishing match ever. Get it NOW FOR FREE! This is a turned-based strategy game for FOOTBALL ADDICTS.

Do you want to be a top manager for your dream football team in a football strategy game card like FLIP FOOTBALL?

Use your best football strategy to claim unbeatable achievements and make the best lineup with high-ranked football players. Create a mobile football legend and be a new star football!

- UNDEFEATABLE team: become a top manager by lining up an amazing top 11 with your best football cards. Equip your team with the greatest football stars in this 2k18 mobile game, dribble past defenders and outsmart your opponents with the fastest flick shots. Here comes a world of football league 2018, the where you can experience top football!

- Get the BEST FOOTBALLERS: Choose the top 11 and get the best football dream team, improve levels in each real football battle with many skill football cards and give them the extra push they need. Unlock new football cards in flip football and move on to high-ranked divisions. Ready to be a top manager and beat a football league 2018? Enjoy the football strategy game for the mobile football world with top 11 players. An awesome flip soccer game!

- DEFEAT the greatest rivals: In Flip football, use your top manager skills so that your football stars conquer the league. This strategy game will lead you to high-ranked matches. Dribble the ball through other opponents in this football league 2018 and be the best with your top 11. Make the quickest FLICK SHOTS and break the NET! New football strategy game! FREE 2k18 mobile game!

- Rise to HIGH-RANKED divisions: Line up your greatest FLIP FOOTBALL players and conquer the football league 2018 to climb to higher divisions with your football stars. In this top football game, get stronger each time with all football stars and by using flick shots to claim the VICTORY, claim to be the league manager. Only the top manager can unlock amazing mobile football cards! Once more, 2k18 football brings new life to flip soccer!

- DIFFERENT combinations: Make a football dream team, get all the best football stars and make quick flick shots! By using your football strategy, you have more chances to line up you top 11 players with optimal defensive and offensive skills in the football cards. Only a league manager like this can create a new star football in you!

- EVOLVE your players: Through this 2k18 mobile game, you can break the net with the most forceful flick shots! Evolve your football dream team, and FLIP FOOTBALL will complete the rest to reach the top football team ever! It’s now or never, a real league manager of 2k18 football. You never know what you will get with your dream football squad. Go get this mobile football game!

Overcome the challenge in 2k18 football! Become a new football legend and lead your football dream team to win the top football! FLIP FOOTBALL promises to let you get the most astonishing match ever by being a league manager in the new flip soccer!

Support and Suggestions: https://fromthebench.zendesk.com
This application offers integrated purchases. You can deactivate them in your device settings.

This application needs you to accept the "Privacy Policy" and the "Legal Notice". It contains advertisements of "From The Bench, SL" and of their partners,

includes advertisements, reunites data through analysis technology and the delivery of third-party advertisements including the location based on the network and GPS.