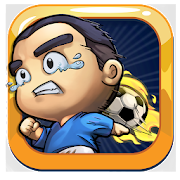 Want to fulfill your dream of playing a football tournament with Messi in your league (or beating him at his own game)? Want to face off against the biggest names and teams in football? Want to hit sick headers at Beethoven?

Now you can, with Flukeoff Football- the premier online multiplayer 1v1 soccer game, where you’re firing balls left and right. Score goals in intense matches against your friends and rise up the leaderboards.

Playing is easy: Just tap to kick the ball, closing in on the goal, or if your opponent has a ball, tap where you think they’ll pass to intercept!

⚽️- A casual and addictive football game that all can enjoy
⚽️- Super-simple controls: just tap to set where to kick the ball, or where to intercept
⚽️- Fun game for all skill levels: you don’t have to be a football fanatic to win
⚽️- Loads of beautiful stadiums to explore all over the world
⚽️- Tons and tons of customization: support your favorite team wearing their jerseys, play as fantastical or historical figures, or create your own characters