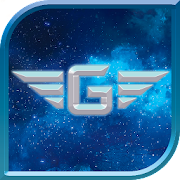 The player pilots a square shaped ship that can shoot automatic independently. Primary objective is to destroy a variety of enemy shapes which attempt to destroy the ship.

Depending on the number of waves, the environment constantly changes and the enemies increase as you proceed into the game. Weapons can be purchased before the game starts, and there are multiple weapons at your disposal to use to survive, such as Shock wave (which can instantly destroy all your surrounding ships), Shield (which will give you the power of indestructible), Helper player (which will help you by shooting enemy ships on its own) among other things.