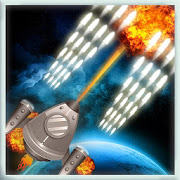 
Galaxy Fighter Jet Aircraft is a challenging game that will give you a galaxy battle like experience with amazing graphics & Gameplay. Now your goal is to save the Universe from its evil enemy's aliens. Your fighter jet across the screen and kill the enemies traveling your skyways. The galaxy fighter jet game puts you at the forefront of a battle with space intruders. You will take control of the lone spaceship and protect your galaxy area. In this galaxy shooting games, you will be faced with an increasingly large number of enemies and deal with many striker bosses in the space war. Best jet fighter games air battles currently attracting more people to actively play with collections fighters.

In galaxy fighter jet aircraft game has 4 different amazing game environments. Every one environment has 10 amazing levels. You can play this jet fighter game on android mobile and tablet. It is the best galaxy shooter game or space jet shooter games of 2018.

HOW TO PLAY:
* Touch screen to move left / right and kill all enemies.
* Collect items to upgrade or change your weapons.

The fighter jet will become stronger by each level passed. There are variations of a spaceship to choose from. Traveling through more than four environments with 10 difficult levels everyone environment. Use your expertise or fighter jet and destroy all amine's jets.

Welcome to galaxy fighter jet aircraft enjoying classic shooting game. Hope to bring you the best gaming experience in the jet fighter game. If you love the original action shooter from the arcade then this game is for you. Free download Galaxy Fighter Jet Aircraft - The Galaxy Fighting Game now on Play Store!