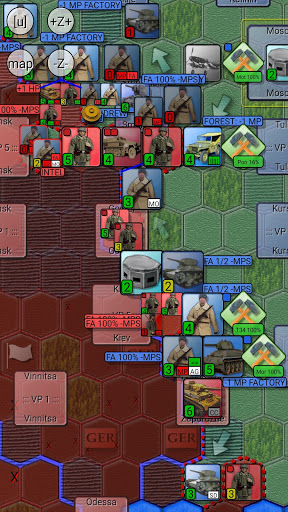 You are in command of the Soviet armed forces and factories on the Eastern Front. The Red Army is facing the German Operation Barbarossa: the biggest concentration of modern divisions the world has so far ever seen!

Factories producing the crucial mechanized units and war resources are unfortunately located fairly close to the front line, losing them would surely be a fatal blow to the war effort.

A factory can be moved towards the rear area but this will be only achieved with a loss of movement from combat units, so a skillful balancing act must be carried out between securing the production and not completely immobilizing the Red Army while it is fighting the mobile Wehrmacht.

Additionally the strict Soviet doctrine for defense calls for going on an offensive if the USSR is attacked, so moving the combat units towards the rear area is not allowed during the first turns without a special Allow-Withdrawal resource.

The object of the Great Patriotic War is to at first stop the German offensive and then turn the tide of the war and start re-taking the Soviet areas. Ultimately the goal is to retake the lost land and advance to Berlin as quickly as possible.

A full version is also available on the store.

+ Long-lasting: Thanks to in-built variation and the game's smart AI technology, each game provides a unique war gaming experience.
+ Settings: Various options are available to alter the look of the gaming experience: Change difficulty level, hexagon size, Animation speed, choose icon set for units (NATO or REAL) and cities (Round, Shield, Square, block of houses), decide what is drawn on the map, and much more.
+ Weather modelling: Spring/autumn mud slows movement, while winter reduces line-of-sight and freezing cold hampers units, especially mechanized ones.

Location, personal, or device identifier data is not used in any way.

Conflict-Series by Joni Nuutinen has offered highly rated Android-only strategy board games since 2011, and even the first scenarios are still actively updated. The campaigns are based on the time-tested gaming mechanics TBS (turn-based strategy) enthusiasts are familiar with from both the classic PC war games and legendary tabletop board games.

I want to thank the fans for all the well thought-out suggestions over the years which have allowed these campaigns to improve at a much higher rate than what any solo indie developer could dream of.

If you have feedback about this board game series please use email, this way we can have a constructive back and forth chat without the limits of the store's comment system.

In addition, because I have huge number of projects on multiple stores, it’s just not sensible to spend handful of hours each day going through hundreds of pages spread all over the Internet to see if there is a question somewhere -- just send me an email and I will get back to you. Thanks for understanding!

Please be aware that maximumandroid only share the original and free pure apk installer for Great Patriotic War 1941 without any modifications.

The average rating is 5 out of 5 stars on playstore. If you want to know more about Great Patriotic War 1941 then you may visit Joni Nuutinen for more information

All the apps & games here are for home or personal use only. If any apk download infringes your copyright, please contact us. Great Patriotic War 1941 is the property and trademark from the developer Joni Nuutinen.