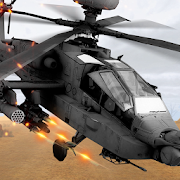 If you love World War 2 or army base games with shooting and invading enemy army camps. Then you must join US air force, get ready to air strike the enemy naval fleet with your Cobra gunship helicopter. Sit inside cockpit of military aircraft fly to the enemy forces camp across desert or in the ocean. Play most amazing gunship battle helicopter game for free. Strike down enemy fighter jets and destroyer boat. Show some real pilot flying skills with gunship helicopter game, use heavy machine gun and fire guided rocket who follow the heat signature. Destroy enemy infantry with your real helicopter flying skills in modern day world war game. Launch the attack on the most dangerous terrorists group who are assembling military grade weapons to attack your city.

The air marshal ask you to gather intel and collect some evidence, but you got engaged by enemy fleet troops. Engage into most thrilling battle of world war. Where you strike battle against the whole army as lone survivor. Play as army gunner in the battlefield and destroy enemy camps, fuel tanker, anti-aircraft guns and more. Fly some most powerful war machines that are built by American army. Strategically fire your powerful machines guns and devastating missiles to slay hordes of enemies across the world. Guide with precision your combat helicopter and demolish the enemy military bases in the world’s greatest combat experience! Fly gunship to strike enemy infantry machines and naval fleet into dust. Combines tactics, flying skills and the right amount of ruthless in this military helicopter action game!