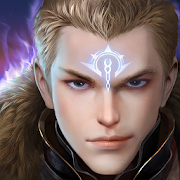 For millennia, people in the world of Novadeisos had lived in harmony, flourishing amongst bountiful lakes and trees, mountains and rivers as far as the eye could see.

But in the darkness grew unrest…

Tired of being oppressed by Terranath, radicals of the remaining nations of Novadeisos plotted in secret and amassed their power.

The radicals drew upon dark powers and unleashed the Daemornians. Having been locked away for millennia, they burst forth, fueling their mortal hunger with the flesh of anything that dared move.

It was at this time that Pope Nikolay stepped forth and sacrificed his life in foreseeing the prophecy of an eternal knight, who would rise up and save the world from the chaos that had engulfed it.

And so Novadeisos lay in ruin, its once bountiful lands now cold and barren, desperately awaiting the rise of the eternal knight.

Will you be the hero this land so desperately needs?

Global war
Real-time multi player battle, bring armies and legions into battle and fight your way to the top!

Change classes
Switch between 4 classes. Draw in sacred power and explode into your archangel spirit form!

Raise pets and mounts
Ride into battle upon your valiant steed, wings spread wide, with your loyal pet at your side, ready to take on the world!

Take on the world boss
When the world comes under threat, combine forces with knights across the globe and take down the common enemy – and be richly rewarded for your efforts!


Change up your look
Heaps of different outfits to keep your look constantly fresh! Slay your enemies with both sword and outfit!

Engage in global warfare in Knights of Nations. Become King of your nation and lead your nation's knights, amassing a great legion and collecting national treasures. Fight for glory. Fight for honor. Fight for your nation!