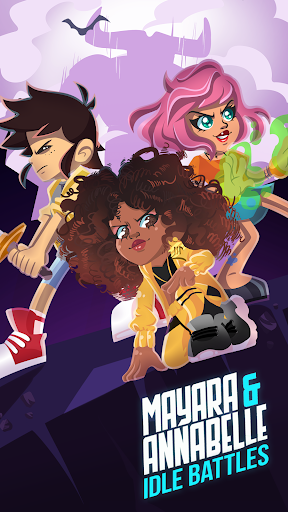 
Drik Barbosa arrives with all her strength and skills to join the fight against evil with Mayara and Annabelle!

Walk around the city, build your team of heroes, equip them with the best accessories and take them into battle to defeat the various monsters!

In Mayara & Annabelle: Idle Battles, the player finds himself in a world where demons and supernatural creatures try to disrupt the daily lives of people in the city.

Your duty is to prevent this from happening by assembling a team of specialists to fight them off. The game mixes action with team management and some elements of idle games.

Explore the city, defeat enemies, upgrade and customize your team and collect resources so that the citizens can be safe from any threat!

Originally from comic books, Mayara and Annabelle make their triumphant entry into the world of games and for that they have more than special help: Drik Barbosa!

The player has the possibility to play with these legendary characters and explore the dreaded Phantom Labyrinth, a series of challenges led by Drik where the player must use their skills and their team to advance and receive great rewards

- Engaging content based on a series of comic books with many cosmetic items, characters and locations that enhance the experience!

- You play in several cities around the world, with visual references for each!

- Develop strategies to form a team that is the most effective for each battle!