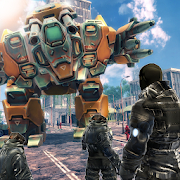 defenders! But on the second try...

On the first try, there was epic civilization war! Alien technology was not ready for such brutal street wars. This time aliens technologies did not adapt giant robots aggressors. Robots lost the mechs battle, but not the war. Leaving the epic post-apocalyptic battlegrounds in a deplorable state, aliens flew home.

Armored robots aggressors, mechs battle machine and aliens cyborgs - technological legions from space overcome millions of miles from distant aliens planet for explore dangerous wastelands and adapt giant robots. Instead of dangerous wastelands - aliens robots find Alon's car and considered it a fiercely humiliating bragging from human race civilization technology. The great human civilization is so proud of its technological process that they put on display to all galaxies its paltry creation. The extinction of the human race will bring their pride. Now, all what people can have - epic post-apocalyptic civilization battlegrounds. Future robot war with railgun and plasma gun in best mecha games 2018.

This is mech wars! You have to fight on the side of aliens technology, adapt giant robots aggressors on the epic post-apocalyptic human planet - Earth.
Sci-fi cyber future technologies have strongest special weapons to give some pain in this warfare conflict. Most powerful features like jet pack, laser, plasma gun, railgun, flamethrower. Citizens urban freedom defenders will die while this mech assault. Human defenders do not have a tough technical combination. Warrior citizens has weak armor, weak guns, they weak military. Bags with bones do not have as much stock of life as giant robots aggressors. Robots aggressors have aliens technology, they are much stronger and powerful and they must conquer human liberty.
But human defenders have one advantage - to protect the city from mechs battle machine will stand hundreds of thousands of people. Thousands of human civilization defenders and their miserable earth technologies VS giant robots aggressors. Realistic mech wars 2018!