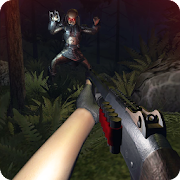 Monster Predator Hunting is FPS horror survival a brave hunter who looks for a mysterious monster beast deep in the northern forest! You have heard the rumors that a lot of people got lost in the forest and later found dead. The newspapers Jasper published message about the disappearance of a group of tourists in the national park. Police believe it was just an accident, because the band went on raft to the river. But your team sure that this definitely involves one of the most elusive creatures that are called Predator or Sasquatch. You decide to get to the truth.

A lot of people who went on finding predator just disappeared. Knowing that this adventure might be very dangerous you prepared for it. In your arsenal you got hunting rifle, flashlight and all the stuff that might be useful. The goal is very easy - track and hunt down the monstrous beast. But be careful the monster is going to tear you apart!
You have to act really smart while tracking the Sasquatch. This monster have already killed a lot of people and it knows what to do. Always remember that in any moment a hunter may become a prey. Place traps, set up cameras to look around and always be ready for an attack from behind. This thing is clever and already know your weak sides.

Start hunting for FREE! and become the brave monster hunter!"