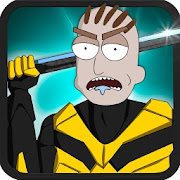 Next War: Clash of worlds

You managed to find shelter in the ultra modern tower, called "Spire". Take control of the base: build modules, recruit soldiers and engineers, develop technologies. Individually prepare each warrior for a battle for the city and storm the invaders spaceships.

In the game you can:
-Place in the Spire 13 different modules.
-To recruit 25 unique soldiers, 5 different classes.
-Work out your strategy by choosing from 180 skills and 53 equipment elements.
-Сonquer, by pieces, the ruined city.
-Take part in multiplayer landings on alien spacecraft and capture the most valuable awards.

In the near future you are expected:
-Replenishment of the arsenal.
-The arrival of new dangerous aliens.
-The оpportunity to unite with other players for joint battles.