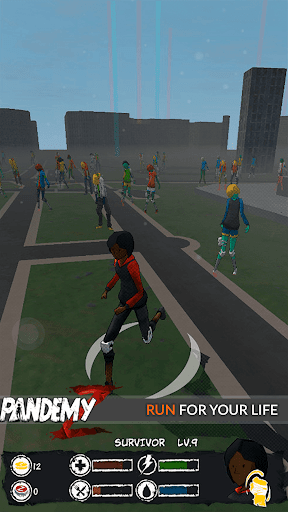 *The game is still on early access and we're doing some small localized tests, constantly adding content and enhancing the experience and we love to hear suggestions and comments from you!

In Pandemy Z: Global Survival You will be a part of one of the 4 factions that coexist in a not very peacefully way while you try to survive in a real world Zombie Apocalypse.

Your Objective?
Survive and don’t die in the attempt, because if you die, you'll get a new identity,
you'll need to fight your old zombie self to recover your lost belongings.

You'll need to find food and something to drink before it's too late.

Hordes of the undead are now roaming free around the world, be careful where you step and where you enter, they are hungry and a simple bite can make you become one of them.

Join one of the 4 factions and fight for the future of the world.

• Geo-localization based Survival RPG
• Thirst, hunger, infection and stress are key factors that will affect your character.
• Psychological profile that will determine which faction fits the most to your personality.
• Tons of customization elements and shaders, customize each piece of equipment and colours.
• Repair your equipment, enhance it, or craft your own!
• Classic turn based RPG combat, your stats matter!
• The Real world and the Real Weather will affect the way you play.
• Anxiety, fatigue, bleeding and infection. Everything affects your gameplay and how you perform in combat.
• Real world node locations where you’ll be able to find loot and equipment.

The game is still on an early access state and it's subject to changes, the screenshots are taken from the early version and might be also subject to changes.
We're a very small indie team, and we need your feedback to make Pandemy Z a successful game. <3