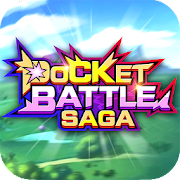 Pocket Battle Saga- There are hundreds of pets for you to catch. It’s not only a game based on varieties of famous pets but also contains cards and RPG elements. The frame with the new battle system can make you feel more fun.

Different kinds of pets——
Pocket Battle Saga has collected almost all the monsters you have seen! You will be no longer restricted by the different version, go and catch the pet you want! Hundreds of different kinds of pets for you to catch. Each pet has four evolution ways. Evolution will not only change pet’s appearance and attribute but also bring you an amazing game experience.

Natural Suppression——Fire, Water, Grass, Wind, Electric, Ground...different natural suppression restrict each other. It is a great chance for trainers to set the team before battle and enchant the special skills combo. By using the strategy you can defeat the strong even you are weak.

Battle Control——In Pocket Battle Saga you can enchant different ultimate skill your pets have to defeat your enemy. And you can also use the Poke Ball to catch the pet you have defeated.

Skills Combo——In the battle, each pet has its own special skill. Match the corresponding pet to trigger the skills combo.