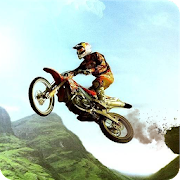 Bike Racing on reckless roads is very challenging game for you and perform stunt! Be a furious rider of moto bike and stunts biker and Perform crazy flips.Accelerate your motobike to the highest speed, survive without falling off the track and jump over the obstacles.You will feel like you are riding or driving for your life on heights to accomplish reckless missions.you will enjoy Beautiful eye-catching graphics to will provide you with the best motorcycle game experience.Each level is more challenging and thrilling than the other level. It is time for exciting ride and crazy sky stunt.

To perform dirty stunts on ramp tracks first wear your bike helmet for safety then as a stunt bike climb up the massive heights but do not fall down the from ramp roads or get hit by flying helicopters otherwise your motorcycle will be crushed.Perform killer stunts on impossible roads with powerful bike engine by doing risky jump over the ramps that are most risky. Driving heavy motobike on narrow paths is almost danger as the hurdles and obstacles are very difficult for stunts overcome so to make it possible you need extreme stunt race bike driving skills for this zig zag tracks. Falling down from impossible tracks will make this simulator game over.