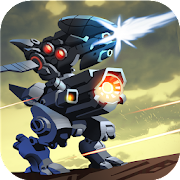 In Robot vs zombies 2 you have to direct your robots in the fighting to kill every zombie's threat by making tactical use of their strongest abilities in order to save humanity Robots vs Zombies 2 is one of the best zombie shooting game where you have to focus on the upcoming threat of zombies and keep firing until you completely wipe them out from the city . To complete missions you have to successfully eliminate all the incoming waves of zombies! Craft and upgrade your favorite robot Play and challenge yourself in this hard robot shooting combat missions. Speed up your robot shooting to kill zombies and avoid smashing humans to maximize your thrill.
Get yourself equipped select your favorite robot and upgrade your robot for ultimate rescue missions. Shoot them on the front do not let them attack the robot. Wipe out the zombies in each mission. you will be guided throughout the levels.

Are you ready to take up the challenges of this Robot vs Zombies 2? Download robots vs zombies 2 fighting game now! Pick up the assault Robot gun and destroy these enemy zombies.