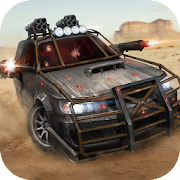 Try your hand in one of the craziest entertainments - monster car wars. That's the appropriate action for the most desperate daredevils. Strike Cars - Armed & Armored car crash game is your personal burst of adrenaline! Drive through the road of fury on your monster car, destroy all battle cars and be a true road king!

Choose a monster car for car wars, equip it with powerful weapons and drive to the starting line. Fight on different locations with the equally hazardous and crazy racers. Bring maximum damage to your rivals by crashing and shooting. The car crash battle is furious and costs the lives of the least fortunate fighters.

Out of car crash combat, you can upgrade your car or buy new, more powerful models. And of course, tuning is necessary even to the battle cars.