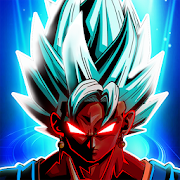 Super Saiyan Go
The ability to become a Super Saiyan(SS) was once considered to be nothing but a legend, as it had not been performed for over one-thousand years
Super Saiyan Go is a new offline combat action game in 2018. Will the battle between God and the devil ever end? And, how can you be sure you’re on the winning side?
There are 20 different super saiyan levels:
1. SS: Ascended Super saiyan, achieved by sacrificing a bit a speed for a large power increase
2. SS 2: This state is achieved when a saiyan goes beyond his natural SS limits, and the user is enraged enough to achieve this transformation; usually through the pain of loss.
3. SS 3: This state is achieved when a SS 2 has surpassed it's natural limits and a deeper power buried far within is available. Takes a lot of practice to transform quickly. It requires an immense amount of power to sustain, and constantly drains the users energy.
4. SS 4: The pinnacle of Saiyan power, this state is achieved when the user is transformed into a Golden Great Ape (A SS who transforms at the full moon) and becomes conscious of his new power. As with all SS transformation, the user's power is increased 50 fold.
5.SS God is a Saiyan transformation that grants the user godly ki, providing them with a power boost beyond Super Saiyan 3 and its predecessors. It is initially obtained through a ritual involving six righteous Saiyans or special divine training.
6.SS Blue , originally only known as SS God Super Saiyan, is a form that combines the power of SS God with the first Super Saiyan form.
7. Ultra Instinct is a very rare and highly advanced mental state. It is notorious among the gods for being exceptionally difficult to master, even for them
....
★ Game features
- Hero super skills: dragon call, ball blast attack, phoenix recall
- 20 SS levels to transform (SSJ1, SSJ2 .., SSJ20)
- 65 pre-design battles with a lot of challenges
- 22 demon bosses with different hidden kungfu skills
- Fantastic skill effects
- Daily reward and lucky spin
Become SS and Fight Now!