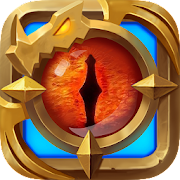 An epic journey of survival; an adventure of betrayal and glory; an anthem for valor and sacrifice, your sword and people are the only things you can count on for. Now, join players across the global to this magic teeming world!

Summon your heroes and activate their skills in battles. In “Terra Dei”, the ever-shifting battlefield brings the best card game experience you can ever have. You’ll be unleashing powerful skills onto your enemies, summon minions, and stay one step ahead than your opponent.

[Game features]
Easy to pick up, exciting fights
All kinds of impressive skills at your disposal, Flame Slash, Fatal Rift, Wraith Elegy, the Underworld, unleash them all and have a great fight with one simple tab.

Character collection and combinations
Dozens of characters for collection, you can get humans, demons, and many other races all in one game. Certain characters can form combos that will boost both characters in battle.

Giant monster, visually astonishing
Strange creatures in the mysterious cave, ancient dragons in the wasteland, and powerful demons in the volcano are waiting for you to discover.

Players’ comments, how to become stronger, it’s up to you
Through the player message board, you can get the first-hand knowledge of the cultivation and value of each hero. Players can communicate directly with each other and get the best answer.