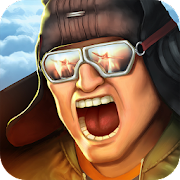 Stunning dogfight with superbly controlled aircrafts, equipped with turret gunners, who must fend off enemy air forces.
And only YOU can win this sky war!
In this flying shooter game we guarantee you the maximum IMMERSION in the gameplay! You will become a direct participant in this battle!
The events unfold on the islands of South Anrithe. You will perform crazy tasks on the warplane with Jones, who is the pilot and commander of the "Resistance". You must defeat opponents on a flying gunshot ship in a dogfight. You are required to be a good turret gunner and shoot down as many enemy airplanes as possible.
By the way, you will fly on an airplane like the legendary B-17 "Flying Fortress". It is not a jet plane, but its wings perfectly glide across the sky.

The goal of this shooting game is to reach the end point of the map, the destruction of the Imperial command, which is in a huge airship and of course - the victory in this merciless flying war.
Among the tasks you will have:
1) Elimination of enemy warplanes during the allotted time, reduction in the number of enemy forces.
2) Dogfight with a certain number of enemy aircraft, the outcome of which is determined by your shooting skills.
3) After the battle, fly to the next location. During the flight you will hear gunshots. You know what to do ;)
4) Shooter, protect civilians with your aircraft turret gun!
5) Your gunshots are required to reach the Bosses, otherwise they will request support, and the help from enemy warplanes will show their force.
Do you consider yourself a good shooter? Sit down to the turret gun of your airplane and prove to us that you are a good gunner! This flying shooting game is unique in its kind.
Features:
- For the whole game, you will shoot over 3,500 enemy warplanes, they will not be able to fly for a long time, and you can make a radical turning point in the war.
- 50 exciting missions with stunning dogfights, warplanes, bombers and accurate shooters.
- 9 kinds of scopes, 6 kinds of howitzers, 10 kinds of rockets, and 12 kinds of turret guns!
- 4 different models of aircraft - like Polikarpov I-15, Messerschmitt AG, Zero, Kamikaze Aircraft.
- 3 epic bosses, which can be shot down only by accurate shooting gunner.
- An old school game with airplanes, guns, shots, gunshot BOOMs, bombs and battles for life and death.
- Interesting walkthrough of the game story with a full 3D simulation of the flight.
While ground troops on their machines are combat with the Empire, military planes are doing their job in the sky.
You need to keep an eye on the wings of your plane and have a jet reaction to the approaching enemy.
To battle!