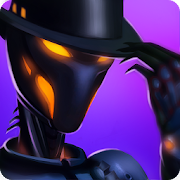 
Versus NEXT Fight is an addictive turn-based fighting game where you can choose a character and fight other players in real-time battles. You and your opponent take turns to plan your attack or defense by using special moves and consumables.

Pick one of 12 unique characters each with its own unique abilities and over 30 skins. Pick skills that suit you, craft a weapon and enter the battle arena. The more you win, the higher your rank and league. And with new ranks and leagues, you will unlock even more ways to defeat your opponents.

Heap
The mastermind and his wingman were made to win all your battles and hearts.

Acidburn
Weak on the outside, she cuts deep and poisons.

Animaya
Swordfight is her favorite hobby.

Guard
Tough, powerful and big boned… definitely not fat at all.

Queen
The leader of the deadly space swarm from Psi-N-Sekto seeking to dominate the whole universe.

Titan
One of many combat robots that were created to protect the Earth.

CLAN WAR:
A clan war is a competition between two clans. The goal is to defeat the opponent's tower and get the maximum of clan XP. The winner clan gets War Box as a reward.

The clan war is divided into two parts: Preparation and War.

Preparation:
- Clan members need to donate their heroes to clan defense;
- Clan leader places donated heroes to clan tower;
- Heroes assigned to tower defense will be unavailable for arena battles during clan war;
- A leader needs to set traps;
- Clan tower positions with no heroes assigned will be automatically taken by the drone.

War:
- Players need to choose a point in opponent clan tower and attack it;
- Only heroes not assigned to clan defense are available to attack;
- Tower lines should be defeated in turns;
- Each hero has only one attempt to attack (no matter if he/she wins or loses the battle).

Note:
Improve your characters to make them stronger. Upgrade your special moves by collecting a certain amount of cards.
Open LOOT BOXES to get new gears.