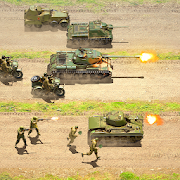 Challenge players from all around the world in the best fast-paced tactic and collectible card pvp-game!

Humanity thought that a strike of WW1 and WW2 would never happen again. But seems like Armageddon had already begun... Help peaceful country survive! Master command of war, guide your army and win the trench war!

Lead your troops to historic triumph! Build a strong card deck and crush your enemy's HQ by tactically deploying your army! Numerous military equipment is at your disposal: stormtroopers, artillery, bunkers, snipers, machine gunners, guns, a tank, a bomb. Earn medals and climb up the Leaderboard! Open crates to unlock new powerful units and spells! Will you get one of the legendary cards?

Variation in strategy and freedom of operation are waiting for you. Fight for courage and glory! Become an honored Commander!

Support:
Are you having problems? Type on ta@amt-games.com or contact us in game by going to Settings > Support.